Global Corruption on the Rise Amid Democratic Decline 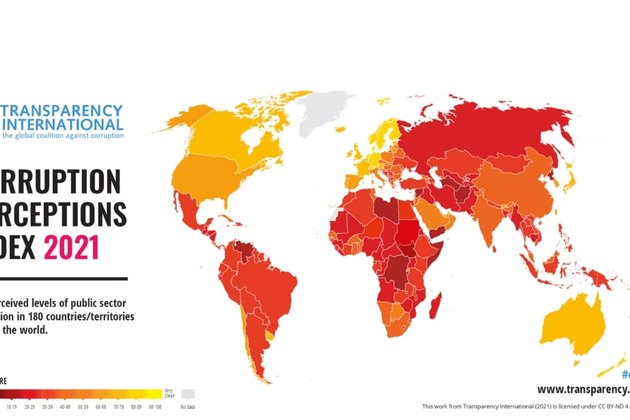 LONDON - The fight against corruption has stagnated over the past decade amid human rights abuses and democratic declines in all regions of the world, according to an analysis by Transparency International.

The 2021 report shows that in 86% of countries, there has been little or no improvement over the past decade.

"Out of the 180 countries we have in the index, 134 have stayed more or less where they were in 2012," said Roberto Kukutschka, a research coordinator at Transparency International who helped compile the report.

The top countries are Denmark, Finland and New Zealand, which all score 88 out of 100 on the index.

Several Western democracies have slipped in the rankings, including the United States, Canada, and Australia.

"There is something happening [in] the countries that were formerly at the top of the index," Kukutschka said. "So when we look at countries like Canada, the United States or Australia - [they] used to be high-fliers in our index and were always promoting the fight against corruption, not only in their countries, but also abroad - are starting ... to slide down the index.

"This is a wake-up call for many of the countries at the top of the index," he added. "They need to take care of their institutions; they need to pay attention to the issue of corruption, because I think it is much harder to build back what you lost than to preserve what you have and improve from there."

"We have also had the spread of disinformation and fake news, which weakened, I think, the credibility of one of the most important watchdogs for anti-corruption, which is the media and the press," Kukutschka told VOA.

Some European Union member states have also fallen sharply on the corruption index over the past 10 years, including Poland and Hungary.

Somalia, Syria and South Sudan - countries riven by years of conflict - remain at the bottom of the index. Twenty-seven nations are at historic lows on the corruption scale, including Cyprus, Lebanon and Honduras.

There are notable improvements in the Baltic states of Estonia and Latvia, and especially in Armenia, says Kukutschka. "The old government was ousted by civil protests a few years ago, and now we have a more reformist government that is really committing to the fight against corruption."

Transparency International identified a clear pattern in the data: the link between anti-corruption and democracy.

"Complacency in fighting corruption exacerbates human rights abuses and undermines democracy, setting off a vicious spiral," the report says. "As these rights and freedoms erode and democracy declines, authoritarianism takes its place, contributing to even higher levels of corruption."