As Australia deploys troops and police, what now for Solomon Islands? 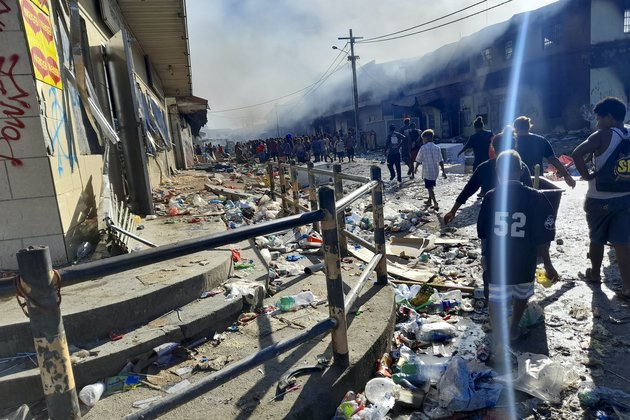 As the initial deployment start their first day in Honiara, there are mixed reports of what is happening around them. Australia's rapid response follows a request from the Solomon Islands government.

What has been happening?

On Wednesday, there were protests against the government of Prime Minister Manasseh Sogavare, which deteriorated into rioting.

These riots persisted, despite a snap 36-hour lockdown, ordered by the government to keep people off the streets. Thankfully, it appears there have been minimal injuries. However, damage to property has been extensive. Businesses in the Chinatown district were targeted, as has happened on several occasions previously. Public infrastructure, including at least one police post and the Honiara High School was also attacked.

After two days of rioting, looting, and arson, things seem to be a bit quieter on Friday. As Solomon Islanders emerge from the lockdown, they are taking stock, assessing damage, and starting to focus on what happens next for them, their communities, and their country.

Why has this happened?

The question of why this is happening involves a complex mix of domestic politics and geopolitical shifts.

It is way too simple to say that this is because Solomon Islands "switched" allegiances from Taiwan to China in late 2019, as some analyses suggest. This was certainly a critical juncture for Solomon Islands. But to understand what is happening now, we need to take a wider and deeper perspective.

There has been a lot of focus on the discontent of people in the populous province of Malaita. The provincial premier, Daniel Suidani, has not held back in his criticism of the central government's decision to trash its 36-year relationship with Taipei in favour of Beijing. And he enjoys strong support from his community.

Less prominent is the fact that the provincial leadership of Guadalcanal, where the capital Honiara is located, have also been highly critical of Sogavare.

Calls for his resignation relate to longstanding concerns about corruption, lack of service delivery, and insufficient consultation on the part of his government (including around the diplomatic switch in 2019). Indeed, many have commented that had Sogavare and his ministers come out to meet with protesters and engage in a dialogue this week, the ensuing disorder may have been avoided.

The history of Australia in Solomon Islands

On Thursday, it became clear the Royal Solomon Islands Police Force resources were being stretched to breaking point. This prompted Sogavare to look for assistance from friends and neighbours. Requests were made to both Papua New Guinea and Australia.

The request to and response from Canberra marks the first activation of a security treaty that was signed between the two countries in 2017 further after "Operation Helpem Fren" (also known as the Regional Assistance Mission to Solomon Islands or RAMSI) ended. RAMSI was a multi-country deployment of police, military and government advisers led by Australia under the auspices of the Pacific Islands Forum between 2003 and 2017.

Morrison has made it clear this current response is an assistance mission, and not an intervention - as was the case for RAMSI. It is expected Australian personnel will be in Solomon Islands for a period of "weeks". Their primary responsibility is to assist Solomon Islands' law enforcement authorities in securing and protecting critical infrastructure. Under the terms of the treaty, there is scope for third countries - such as PNG and Fiji - to be joined to a mission, with the permission of the government of Solomon Islands.

What happens next is not easy to predict.

Sogavare says he will not resign as this would be anti-democratic and an acceptance of mob rule. He is also insisting alignment with China puts Solomon Islands on "the right side of history". In fact he has gone further to (without naming names) imply Taiwan and the United States are fomenting discord in his country.

The people of Solomon Islands already bear a heavy burden. Their young population lack opportunities and it is no surprise to learn that many of those involved in this week's disorder are teenage boys with no meaningful political agenda in mind, looking for whatever excitement presents itself on a given day.

While the country is COVID-free, the impacts of extended border closures have had significant economic impact on a country struggling to provide basic services to its population. For many, the events of the last few days have brought back unhappy and traumatic memories of the days of "The Tensions" - the inter-ethnic conflicts and bloodshed that led, eventually, to the RAMSI intervention.

The people of Solomon Islands are strong, resourceful, and resilient. They are blessed with some of the most articulate and strategic thinkers of our region who can help them navigate what the future brings. Australia has an opportunity to walk the talk of "tru wantok" (Pidgin for "real friend") and support them in this journey.