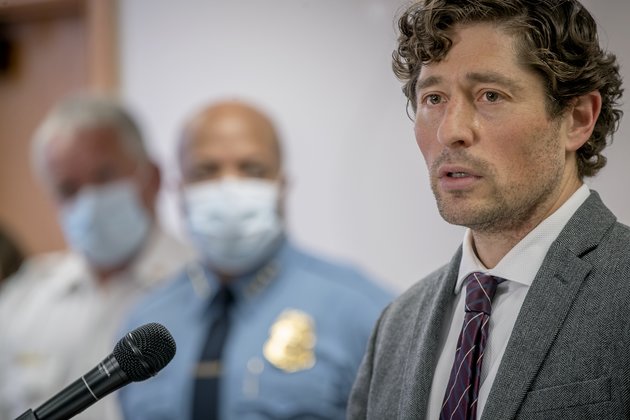 He worked with the city's booming business community and the City Council. He reached out to minority neighborhoods and advocated for affordable housing. He implemented stricter disciplinary measures against police who violated the city's body camera policy.

When George Floyd, a handcuffed black man, died Monday after a white police officer pressed his knee into his neck for several minutes and ignored his "I can't breathe" pleas, Frey quickly expressed outrage and called for charges against the officer. Four officers were fired the next day, and on Friday, Officer Derek Chauvin was charged in Floyd's death.

But Frey's leadership is being questioned after police failed to quell three nights of looting, rioting and fires that followed Floyd's death. Frey, who pleaded for calm, also approved the decision to abandon the city's 3rd Precinct station on Thursday night, surrendering it to protesters who set fire to the building.

The night the station burned, Frey appeared at an early-morning news conference after hours of criticism on social media for a police response that didn't confront the violence despite the activation of the National Guard. As he began talking, one reporter snapped, "What's the plan here?" Frey struggled to answer, and the next morning, Gov. Tim Walz - like Frey, a Democrat - criticized the "abject failure" of the city's response and said the state had taken control. President Donald Trump took to Twitter to call Frey a "very weak Radical Left Mayor" and threatened to get involved.

By early Saturday morning, it was Walz who found himself struggling with the enormity of the challenge, conceding that he didn't have enough people to cope with the protests and moving to mobilize another 1,000 Guard members. Walz also took pains to praise Frey, who appeared alongside him after another night of unrest.

Some wonder whether Frey's approach to the crisis might damage his chances for reelection next year. The 38-year-old former lawyer, community organizer and one-term City Council member took office in 2018 after defeating Betsy Hodges, whose time as mayor was marred by two high-profile police shootings.

The 2015 shooting of 24-year-old black resident Jamar Clark after a scuffle with two white police officers set off weeks of protests; neither officer was charged. The 2017 shooting of unarmed Australia native Justine Ruszczyk Damond, who had called 911 to report a possible sexual assault behind her house, provoked an international outcry. The black officer in that case was convicted of third-degree murder and is serving a 12 1/2 year term.

Frey campaigned partly on a promise to add police officers. But a City Council committee this spring voted against applying for a federal grant to hire 10 new officers for traffic enforcement, with one member saying he worried it would exacerbate racial disparities in vehicle stops.

Community activist Mel Reeves, who said he has led rallies to protest Floyd's killing, refused to discuss the mayor's response except to say that Frey had been "put in a difficult position." He said the black community doesn't trust police and prosecutors to do the right thing.

"The mayor is new, and he said all the right things," Reeves said. "This is not about the mayor; it's about the police department."

The day after the 3rd Precinct fire, University of Minnesota political science professor Larry Jacobs said Frey was "out of his depth" and "clearly unable to understand what he has to do to restore order while also creating the kind of healing that has to happen in Minneapolis."

He said abandoning the police station "sent a powerful message" that the city was not in control.

"There needs to be another message: 'Here is the line and order will be maintained,'" said Jacobs. "You've got businesses that are just shocked without words to see property going up in flames, often with no police intervention at all. You have the black community (that has) heard his words but does not believe them.

"He worked really hard at those relationships and they appear to be in tatters. And I think a lot of residents are unnerved by the violence and the chaos."

Jonathan Weinhagen, president and CEO of the Minneapolis Regional Chamber, said the mayor still has his support, and that many businesses damaged by the violent protests, including those owned by minorities and immigrants, want to rebuild.

"There is a lot of fear right now. If your store has been hit, you feel violated," said Weinhagen, adding that some businesses already were suffering because of the coronavirus restrictions. "They were just beginning to see some light and this hit."

But he believes the mayor is "leading with his values" and getting a lot of things right, including requesting the Guard assistance and implementing a curfew Friday and Saturday nights.

Jacobs, the political scientist, said Frey has been energetic, upbeat and dynamic, effectively leading the fast-growing city. But his inexperience with crisis management has shown.

"Until about a week ago, he looked to be on glide path to reelection, and within a week, his mayorship looks like it's crumbled," Jacobs said.