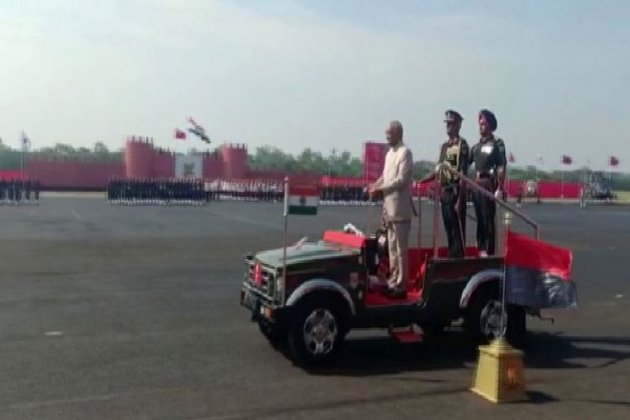 Nashik (Maharashtra) [India], Oct 10 (ANI): President Ram Nath Kovind on Thursday presented the prestigious Colours to the Army Aviation Corps in Nashik and lauded them for their contribution to the nation.

Speaking on the occasion, the President said that the Army Aviation Corps has earned 273 honours and awards for conspicuous gallantry and distinguished service. This speaks volumes about the exceptional valour and high spirit of the Corps personnel and is a model for all soldiers and officers of our armed forces.

"They have been excellent ambassadors of our country while operating overseas in countries like Somalia and the Democratic Republic of Congo while serving at United Nations Peace Keeping Missions," he added.

"Honoured to present Colours to Army Aviation Corps at Nashik, Maharashtra. I congratulate all veterans and serving soldiers of the Corps for their valour and devotion to duty. The Indian Army and the nation is proud of you," the President tweeted.

The President paid homage to the martyrs of the Army Aviation Corps and said that their blood and sacrifice have secured our sovereignty and brought glory to our nation.

He said that members of the Army Aviation Corps have been true force multipliers in some of the most inhospitable terrain and adverse climatic conditions in the world. The Indian Army and the nation are proud of them.

Subsequently, the President visited the School of Artillery, Deolali and interacted with the gunners.

Kovind is on a five-day visit to Maharashtra, Karnataka and Gujarat. During his visit to the three states between October 9 to 13, the President will be participating in various official engagements. (ANI)