CyberPeace collaborates with NCERT and UNESCO for eRaksha Awards 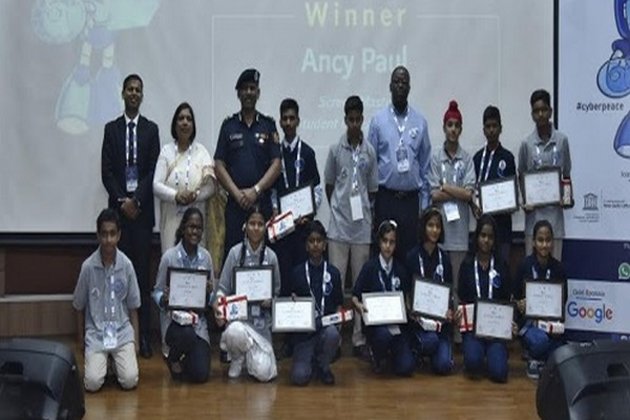 New Delhi [India] Oct 10 (ANI/NewsVoir): One of the world's largest competitions on cyber peace, online safety, and cyber-wellness was held from Feb 2019 to August 2019. This competition was organized by the CyberPeace Foundation in collaboration with the National Council of Educational Research and Training (NCERT) and UNESCO New Delhi Office.

The aim of this initiative was to sensitize the children and teachers on cyber-security and get them engaged in a meaningful dialog by expressing their ideas on online safety in the form of painting, slogan, videos, and posters. The competition was announced on the occasion of Safer Internet Day on the 5th of February 2019 and was launched on 15th April 2019.

The competition ended on the 31st of August and the award ceremony was organized at UNESCO in New Delhi on the 30th of September 2019. This competition is sponsored by WhatsApp and Google and supported by Twitter, Instagram, YourStory and AutoBot Infosec.

"The contest was open for all types of schools - Central Government, State Government and Private Schools across India. Students and in-service teachers working in schools were invited to participate. Categories of students and teachers were created to equip them as effective future leaders of this Digital World. As a result of this competition, we successfully spread the message of cyber peace and cybersecurity inclusively", said, Capt Vineet Kumar, President, CyberPeace Foundation.

The competition saw overwhelming participation from 28 States and 7 Union Territories, adding to the diversity of the competition and the overall vision of a completely cyber-aware India. There were 15000 plus submissions from across the length and breadth of India including entries from the remotest part of the country such as Andaman and Nicobar Islands to the rural areas in the north-eastern part of India. Entries were also received from Russia and UAE.

The winners were selected after multiple rounds of rigorous evaluation. There were three rounds of assessment before deciding the finalists. The final evaluation was done by an expert jury across all segments connected with cyber-security, government, industry, civil society, academia, and mental health institutions- (NIMHANS, AIIMS). The winners for the awards were 15 students and five teachers across India.

As India touches a figure of 730 million Internet users and experiences several cyber-attacks on individuals every second, the need for competitions like eRaksha increases.

The event was attended by representatives from United Nations agencies, government, industry, academia (Kendriya Vidyalaya, Navoday Vidyalaya, NCERT, CBSE etc) and civil societies. This competition has definitely galvanized the young minds to think and work for cyber peace in this highly vulnerable cyberspace. The day-long celebration which included Musical performance, address by dignitaries, award distribution concluded with the creation of Cyberpeace Ambassadors to spread the message of cyber peace, online safety, and responsible behaviour online.

This story is provided by NewsVoir. ANI will not be responsible in any way for the content of this article. (ANI/NewsVoir)