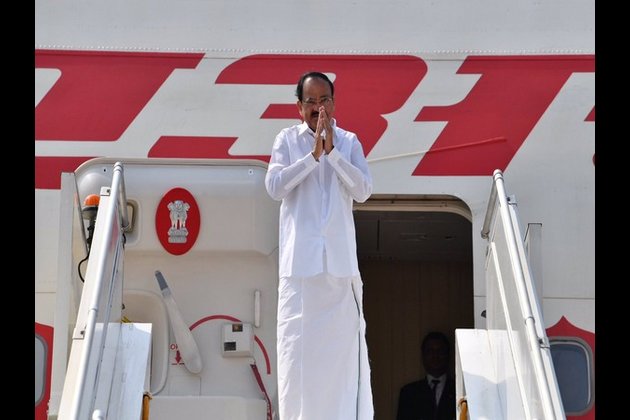 New Delhi [India], Oct 10 (ANI): Vice President M Venkaiah Naidu on Thursday departed for a five-day trip to the Union of Comoros and Sierra Leone with an aim to intensify India's bilateral ties with the African continent.

Naidu's trip will mark the first high-level visit from India to the two African countries. The Vice President will be accompanied by a high-level delegation and other government officials.

Naidu will arrive in Moroni later today and will hold a detailed bilateral meeting with the country's President Azali Assoumani followingly. The three-day visit will witness the Vice President interacting with the Indian community and calling on Abdou Ousseni, the President of the Assembly of the Union of Comoros.

A number of Memoranda of Understanding (MoUs) and agreements are expected to be signed during the visit, according to a release by the Ministry of External Affairs (MEA).

India shares close, warm and friendly relations with Comoros which are cemented by mutual trust, development partnership and presence of a small but significant Indian diaspora. New Delhi has extended concessional lines of credit of USD 41.6 million for setting up an 18 MW power plant in Moroni. The bilateral trade is modest and reached USD 47.11 million in 2018-19.

Comoros avails scholarship/training programmes offered by India under the Indian TechnicalEconomic Cooperation (ITEC)/IAFS III and ICCR schemes. India has extended humanitarian assistance to Comoros in 2012 and has been paying an annual contribution of Comoros towards its membership of Indian Ocean Rim Association (IORA), the MEA said.

In the last few years, India's engagement in various fields with Comoros has intensified. President Azali Assoumani led a delegation including Minister of Foreign Affairs Mohamed El-Amine to participate in the Founding Conference of International Solar Alliance in March 2018 in New Delhi. Earlier, the then President of Comoros attended the third India-Africa Forum Summit in October 2015.

Naidu will arrive in Sierra Leone on October 12. The following day, he will have a detailed bilateral meeting with country's President Julius Maada Wonie Bio and will meet Speaker of Sierra Leone Parliament Chernor Bundu as well as country's Foreign Minister Nabeela Farida Tunia.

The Vice President will also interact with the Indian community during the meeting.

India has a long history of cordial relationship with Sierra Leone. New Delhi had played an important role in achieving peace and stability in the African country by contributing troops to the UN Assistance Mission in Sierra Leone (UNAMSIL) in 2000-01. India has also assisted Sierra Leone in the post-conflict peace-building phase.

New Delhi has extended concessional lines of credit to Sierra Leone worth USD 123 million in sectors such as agriculture, water and transmission line. In addition, Sierra Leone has also availed lines of credit worth USD 49.45 million from ECOWAS Bank for Investment and Development (EBID) for projects in solar and telecom sector out of Lines of Credit extended by India to EBID, the MEA said.

India has also undertaken grant projects through IBSA fund and provided direct humanitarian assistance to Sierra Leone during the Ebola crisis in 2014 and during floods in 2017. Sierra Leone is also a beneficiary of Indian TechnicalEconomic Cooperation (ITEC) programme. The bilateral trade has remained modest in recent years and in 2018-19, it was US$ 124 million.

"The first-ever visit of Vice President to the two countries is expected to provide new momentum to our bilateral partnership with these countries. The visit is part of India's Africa outreach policy. Our engagement with the African continents has intensified in the last 5 years and covers a large number of sectors," the MEA said in a statement. (ANI)