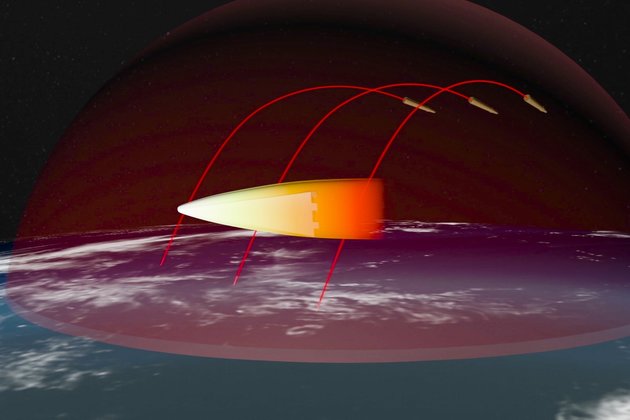 LONDON - New missile technologies, including so-called hypersonic systems capable of traveling at more than 25 times the speed of sound, are fueling a new global arms race, according to a new report from analyst group the European Leadership Network.

The research warns that the collapse this month of the Intermediate Range Nuclear Forces (INF) Treaty between the United States and Russia is just the latest example of the growing pressure on the global security architecture. The researchers say new treaties are urgently needed to counter the threat of emerging technologies.

Russia conducted the latest test flight of its "Avangard" hypersonic missile system in December of last year. Moscow says the Avangard is able to evade all current defense systems.

The Avangard system involves attaching a regular intercontinental ballistic missile to a "glide vehicle" that travels at more than 11,000 kilometers per hour on the edge of the atmosphere, then releases the weapon once over its target. It would be able to carry nuclear and conventional payloads.

The United States, China and Australia also are developing their own systems, said report author Katarzyna Kubiak of the European Leadership Network.

"These are going to outmatch existing missile systems by speed and by maneuverability, and are going to be able to potentially bypass any existing air and missile defense systems for years to come. And on top of this, we also witness an exploration in anti-satellite technologies, which include missiles," said Kubiak.

Furthermore, the development of dual-capable missiles that can carry conventional or nuclear warheads has introduced a new level of ambiguity, and the potential for devastating miscalculation, said Kubiak.

"In a crisis situation, the military is acting under very heavy pressure. And not knowing what kind of missile is flying into them, they might either assume the worst-case scenario or misjudge a situation, which could then lead to an inadvertent escalation," Kubiak added.

The failed test of a missile in the Russian Arctic earlier this month killed at least five workers and led to a spike in local radiation levels, underlining global concerns over Moscow's development of nuclear-propelled missiles.

Kubiak said the global security architecture surrounding missile proliferation is under a huge strain and is being rapidly outpaced by developing technology.

The report says the international community urgently needs to put the subject of missiles higher on the political agenda, including the strengthening of existing non-proliferation and transparency measures and negotiating treaties to address new technologies.