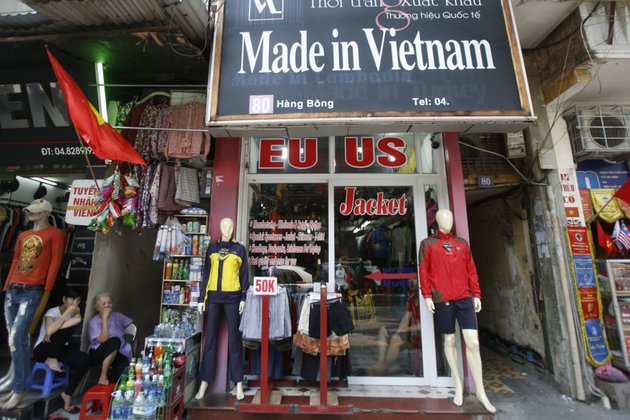 TAIPEI, TAIWAN - A trade deal with the European Union expected to be ratified this year will accelerate growth of Vietnam's export-reliant economy without help from the U.S. market, analysts say.

The European Union-Vietnam Free Trade Agreement signed in 2015 should speed annual economic growth by half a percent to more than 7 percent by 2019, according to data from the business consultancy Dezan Shira & Associates.

European Union members Germany, the Netherlands and the United Kingdom already take 9 percent of all exports from Vietnam, and 28 states belong to the whole bloc.

The deal signed by negotiators in December 2015 must pass the European Parliament as well as Vietnamese lawmakers.

"It should give Vietnam better access to European markets, not just the usual garments and footwear but also for seafood and other agro-processing products," said Adam McCarty, chief economist with Mekong Economics in the capital Hanoi. "Generally, it will be good."

Vietnam counts the European Union, with a market of about 500 million people, as its No. 3 trading partner after China and the United States. Their trade totaled about $50.4 billion last year.

Vietnam relies on exports of garments, auto parts and consumer electronics to stoke a GDP that already outgrows most of the world. It had hoped the Trans Pacific Partnership trade deal would open tariff-free access to the United States until U.S. President Donald Trump withdrew from it last year.

The EU-Vietnam deal will eliminate import tariffs on 99 percent of all goods within a decade and open Vietnam to European services such as health care, packaging and conference hosting.

Elimination of tariffs will save money for manufacturers based in Vietnam and selling to Europe.

"It won't be able to compensate, because the U.S. is still the largest and most important economy, but it gives businesses opportunities," said Song Seng Wun, Southeast Asia-focused economist in the private banking unit of CIMB in Singapore.

ASEAN leaders take a group photo ahead of the opening ceremony of the 32nd ASEAN Summit in Singapore, April 28, 2018.

For the European Union

The European Union pursued the trade deal with Vietnam so its companies could better access an increasingly wealthy consumer market of about 93 million people. Foreign investors favor Vietnam for its low wages, creating domestic jobs that in turn drive consumer spending.

The agreement also gets the EU into the Association of Southeast Asian Nations (ASEAN), a 10-member trading bloc to which Vietnam belongs.

The EU failed to finish a trade agreement with the association in 2009, after two years of talks, in part because the bloc could not reconcile the varied agendas of all member states.

Analysts say a Vietnamese trade ministry meeting this month with the EU's trade commissioner indicates that a deal is nearly done. The two sides "reached consensus" at that meeting on all content of an investment protection agreement, the Communist Party news website said.

In a possible snag, European Parliament members had voiced concerns last year over human rights in Vietnam. Some suggested more debate in Vietnam on political rights and freedom of expression.

Vietnam may want the final trade deal to scrap its classification by the EU as a non-market economy, McCarty said. That designation would further liberalize the Vietnamese trade in footwear, he said.

Today's rules, which the EU set to head off export dumping, give Vietnam a "headache," he said.

European investment in Vietnam had already picked up over the past two years in anticipation of a finished free trade deal, Brown said.

As of last year, 24 countries from Europe had made a combined 2,000 investments in Vietnam. They were worth a total of $21.5 billion.

"It's gotten to this stage, so there's an incentive for both sides to get over the finish line and open up the market for European manufacturers, exporters and get Vietnam more FDI," Brown said.